Exporting the Result of your Analysis

After each iteration and before you make any changes to your project, Explorer provides a "Reports" dropdown menu where you can save the current result of your analysis in different formats. There are 4 options; PDF, Sentiment Drivers, Excel and CSV. 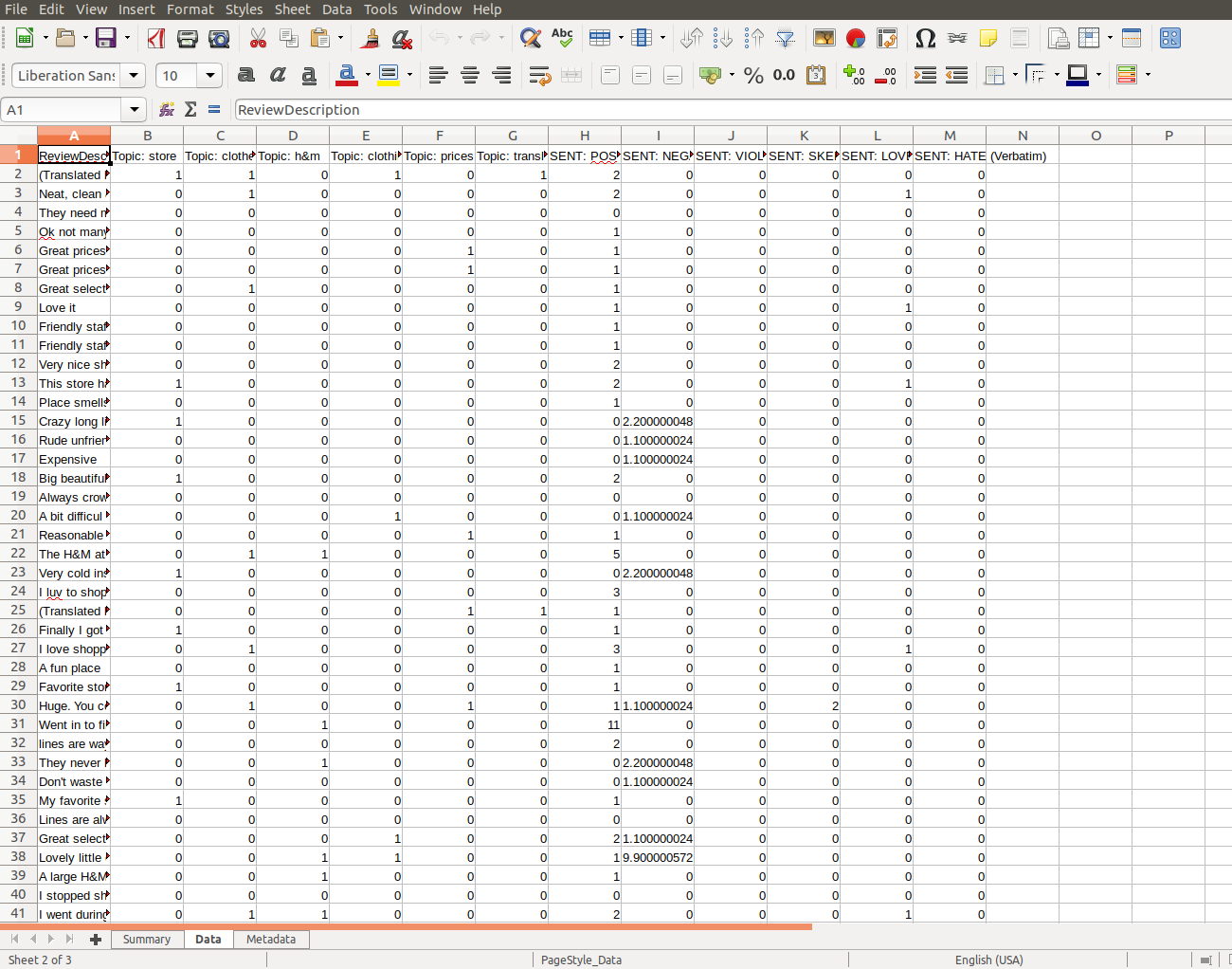 When you choose the format, a message box will pop up (next figure). You can either choose to be redirected to the Settings and Reports page (see Project Settings - Reports) where you can download your file or you can do it later by pressing Ok. The "Settings and Reports" page can be accessed at any time directly in the project, or through the "Actions" next to a project in your list of projects.

Save as Excel and Full CSV

If you select Excel or CSV format, you then have the option to configure a number of extra parameters in your report. 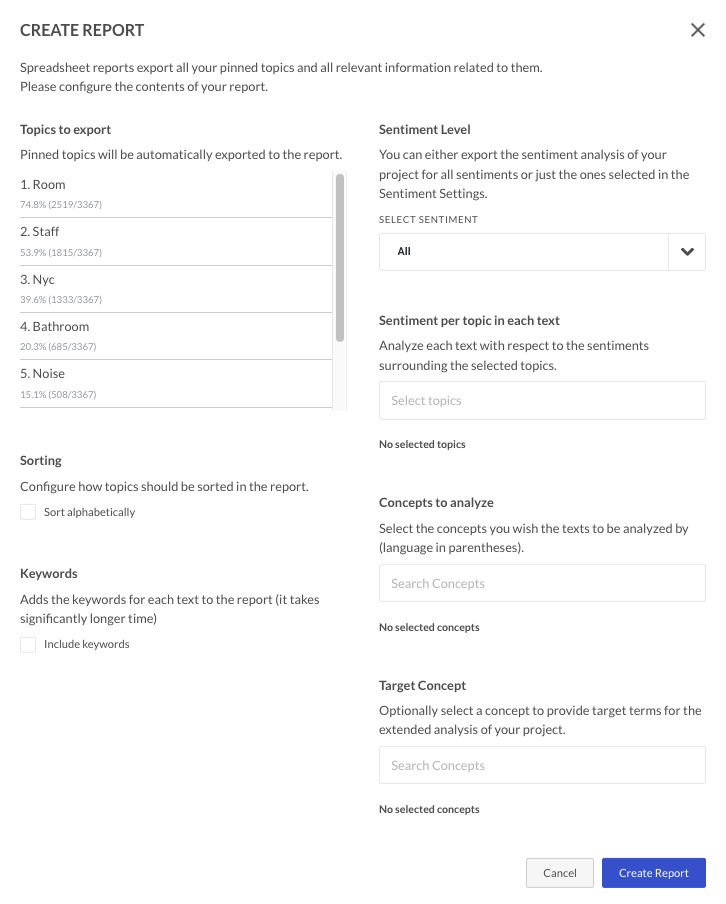 Topics can be sorted alphabetically or by frequency (default option). Keywords can be included or not. You can choose which concepts to analyze and which topics to count sentiment for. A target concept for the whole report can also be set.

When you download the result of your analysis, aside from the summary tab, you you also will have a data tab containing your original data appended by the analysis result from Explorer. Since all cells are handled as text, eventual metadata specifying the cell type is lost as well as any eventual formulas existing in the original excel file. If the meta-type of a number column is important for you then just export the report in a CSV format and use the import function in excel to create an excel version of the report. Excel normally interprets the text containing a number as a number type, given it is according to the format of the excel application importing the CSV file. Explorer performs a row based analysis of your data in respect to your pinned topics, target concepts and sentiments, and for each text it adds the result of the analysis to the corresponding row. In the following we explain the appended columns.

The first added columns are the columns regarding to your pinned topics. You can see the name of each pinned topic in a header of a column. A cell in a topic column contains 1 if the corresponding text includes that topic, and 0 otherwise.

The next added columns are the ones containing sentiment scores. Explorer measures 8 standard sentiments for each text; they are: SENT: DESIRE, SENT: FEAR, SENT: LOVE, SENT: POSITIVITY, SENT: SKEPTICISM, SENT: NEGATIVITY, SENT: HATE, SENT: VIOLENCE. If you have Neutral sentiment feature on (see Project Settings - Sentiments), then there will be a column for NEUTRAL as well. You can see their names on the header of the columns. Each cell in a sentiment column contains the score of that sentiment for the entire corresponding text. In case you have selected a Target Concept for the analysis of your project, the sentiment scores will be restricted to the sentences that contain at least one of the terms in any of those concepts.

For a selected topic, you can gauge the sentiment in each individual text and add a column for each sentiment to the report. For instance, if you select a topic after clicking the Export as Excel or CSV dialogue box to bring up the Configure Report Box, each text in your project will be analyzed with respect to the Positive, Negative, and Skepticism sentiment around the topic, and the columns for the sentiment scores of the specific topic(s) chosen will be added to the resulting Excel file under the name Sent: Positivity(topic name).

*note adding a lot of topics to analyze will add thee columns per topic. Thus, the report generation time will be affected, the more topics are selected.

The Sentiments per topic and per verbatim are used in the Driver PDF report.

You can select your sentiment-based concepts under "Concepts". In this case, Explorer computes the strength of each concept for each text and shows them to you in new columns, one for each concept. Here the computation is performed in the same way as for Explorer built-in sentiments.

The next columns is the target concept that you have chosen to include in the report. The Explorer will append two new columns for your chosen target concept. First, a column in the Excel file having the concept name in its header. Each entry in a concept column is the number of distinctive terms in that concept that are included in the corresponding text. The other column includes the sentences that appeared in the corresponding text.

Satisfaction Drivers is a new form of report on the base of Explorer's best features that provides an effortless and efficient "one click" analysis highlighting satisfaction drivers in survey responses, reviews, etc. It’s quick, easy, and doesn't require any additional user input.

In the other words, it gives a direct answer to the question "What drives respondent satisfaction?".

The "one click" functionality is accessed directly from the Explorer start page. After an Excel file with at least one text column is uploaded, the project is created and explored. It is also possible to generate a Satisfaction Drivers report by choosing "Driver (PDF)" in the "Save as" drop down menu in your existing projects.

The report will show a simple and neat visualisation of a handful selected drivers from the given datafile - both positive and negative (if applicable).

The axes of the diagram are: Y axis - correlation to overall satisfaction, X axis - driver satisfaction ratio (in %). Each bubble represents one driver, based on the analysis of topics and their related topics. The drivers’ position on the diagram represent their importance and meaning for the customer satisfaction.

This is a PDF report that mirrors the web application. It will show the Groups, Topics, Terms that build up a Topic, and the Related topics for each Topic. This is useful way to share the report.