Gavagai Explorer uses a lexical approach to perform sentiment analysis. The system uses a curated list of sentiment bearing terms for each sentiment (the sentiment's lexicon), to determine the sentiment for verbatims. To ensure that the sentiment analysis performed by the system is usable across domains, the lexicon for each of the sentiments is generic, and contains non-ambiguous terms. For example, the term 'soft' has no sentiment inherently, however in the context of diapers it is a positive term and in the context of teeth, it is a negative term. To ensure that the analysis of neither data set is negatively impacted by the term 'soft' being classified as positive or negative, the term is excluded from the lexicon of both sentiment. However, for analysis of a dataset of diaper reviews, it would be appropriate to classify 'soft' as positive specifically for that dataset. This can be achieved by utilizing Sentiment Customizations. 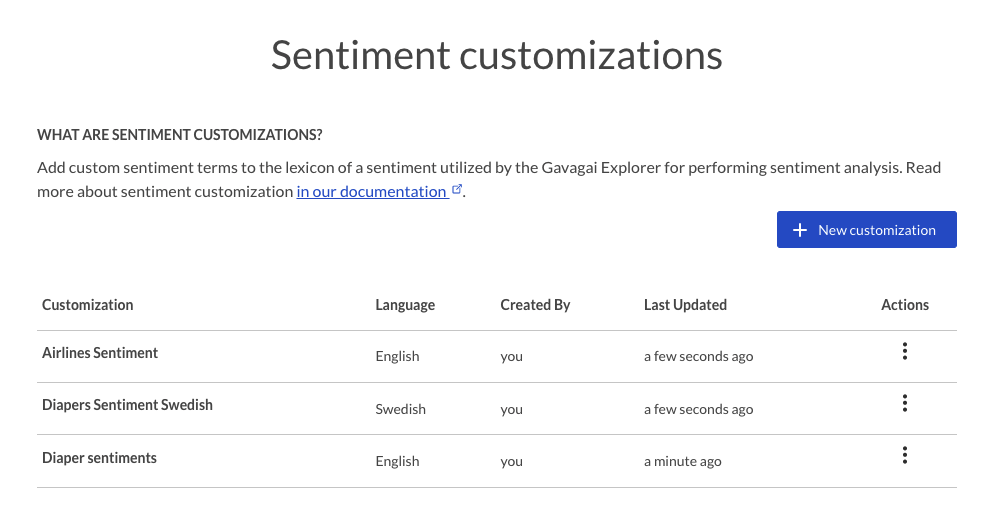 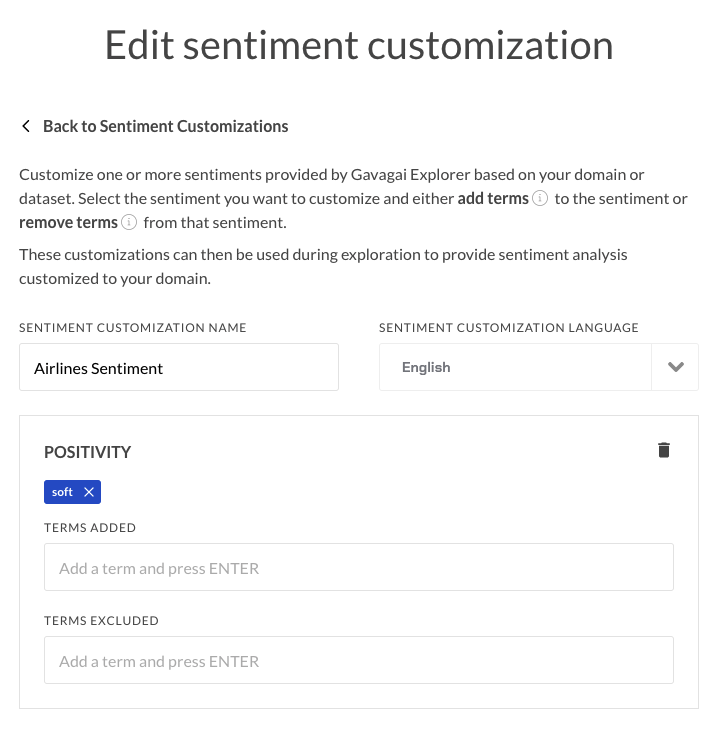 If you are an advanced user of Gavagai Explorer and are aware of the details of the sentiment algorithms, you may choose to include/override weights for relevant sentiment term, by adding a '::' followed by the weight after the term. For example, if you would like to include the term 'softer' with weight 1.2, you may do so by entering softer::1.2 in the text input. If the weight for any of terms is different from the default, it will be displayed when the term is hovered over.

For example, if the term 'beast' is removed from the sentiment 'NEGATIVITY' in a Sentiment Customization, and that customization is used while exploring a project, when the system encounters the term 'beast', it will not be treated as a positive term when performing sentiment analysis.

In some cases, you may want to the system to treat a term as part of a sentiment's lexicon that it is not generally associated with. For example, the term 'cold' is generally considered a negative term, but not in the context of ice cream, in which case it is considered positive To apply this customization to your data set, you need to create a Sentiment Customization in which 'cold' is part of the the 'Added Sentiment Terms' for POSITIVITY and also part of the 'Removed Sentiment Terms' for NEGATIVITY.

Applying a Sentiment Customization to a project